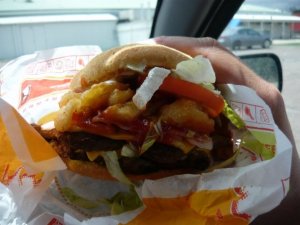 Fat people should pay more to fly, because they weigh more and hence use more fuel.
Fat people can’t make good food choices so they should be coerced and stigmatized into making the right choice.

These and other spurious ideas are permitted to float around opinion pages of leading newspapers and journals because a) we think we have a fat people problem; b) shocking, blunt and simplistic solutions to complex problems are key ingredients to “click-bait”; and c) if we can reduce complex problems to economic calculations then we can pretend moralistic interventions into peoples lives are “neutral” because, hey it’s the raw numbers talking.
Anyway, in the below paper published this week I argue against Peter Singer and Dan Callahan’s attempts to justify direct interventions into the lives of fat people based on a simplistic use of the harm principle and a deep ignorance of empirical and public health research on obesity. Or as H.L. Mencken quipped, “For every human problem, there is a solution that is simple, neat, and wrong.”
If you can’t get beyond the paywall send me an email or message.

The Harm of Bioethics: A Critique of Singer and Callahan on Obesity

Debate concerning the social impact of obesity has been ongoing since at least the 1980s. Bioethicists, however, have been relatively silent. If obesity is addressed it tends to be in the context of resource allocation or clinical procedures such as bariatric surgery. However, prominent bioethicists Peter Singer and Dan Callahan have recently entered the obesity debate to argue that obesity is not simply a clinical or personal issue but an ethical issue with social and political consequences.

This article critically examines two problematic aspects of Singer and Callahan’s respective approaches. First, there is an uncritical assumption that individuals are autonomous agents responsible for health-related effects associated with food choices. In their view, individuals are obese because they choose certain foods or refrain from physical activity. However, this view alone does not justify intervention. Both Singer and Callahan recognize that individuals are free to make foolish choices so long as they do not harm others. It is at this point that the second problematic aspect arises. To interfere legitimately in the liberty of individuals, they invoke the harm principle. I contend, however, that in making this move both Singer and Callahan rely on superficial readings of public health research to amplify the harm caused by obese individuals and ignore pertinent epidemiological research on the social determinants of obesity. I argue that the mobilization of the harm principle and corresponding focus on individual behaviours without careful consideration of the empirical research is itself a form of harm that needs to be taken seriously.