Libraries played an important role in the emergence of bioethics in Australia. They made difficult-to-access resources available and provided a space for discussion and debate. Over the past decade these bioethics libraries have either been enfolded into larger institutional collections or moth-balled as a legacy of a previous generation.

The rise and decline of these libraries says something about the changing nature of bioethics, but also the way information is collected, accessed, and distributed.

While there are a number of examples of these libraries across Australia, I will mention two here: the Tom Ludowici Bioethics Collection at the Sydney Adventist Hospital and the Queensland Bioethics Centre at the Mater Hospital Brisbane.

Perhaps the biggest surprise of my research so far has been what is now known as the Tom Ludowici Bioethics Collection at the Sydney Adventist Hospital in Wahroonga, Sydney. 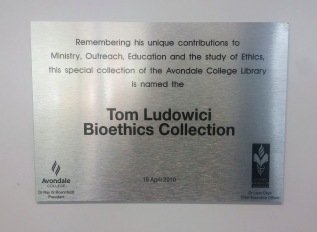 The library boasts over 7, 500 physical bioethics books as well as numerous journal subscriptions and conference proceedings. By contrast the University of Sydney has 5, 518 bioethics books or ebooks (the latter making up a significant proportion of the total number).

I was surprised to discover this library because I studied and taught bioethics in Sydney and spent my teen years not too far from this hospital. Yet I never heard of this extraordinary bioethics library.

I stumbled on the collection via Trove. Whenever I would search for an early bioethics document Avondale College Library, which now houses the library, was almost always among the libraries listed as holding a copy.

In 1987, Dr Bert Clifford (CEO of the Sydney Adventist Hospital 1968-1990) established the Centre for Christian Ethics along with Dr Tom Ludowici (Senior Chaplain). In their proposal to the Sydney Adventist Hospital board they listed the Resource Library as the first of six activities, with the aim of developing ‘an outstanding collection of bioethical books, periodicals, audio and visual materials and other research resources’. They proposed an initial budget of $8000 to purchase books. On a recent visit I spoke with Michael Rigby (head librarian) who said he still has a budget line for purchasing bioethics books.

The collection continues to grow, but who uses it?

The Queensland Bioethics Centre was established in 1981 by the Archdiocese of Brisbane. Its role was to be a ‘point of contact for Catholic Hospitals, Doctors, Nurses or others who wish refer to medico moral matters for research and discussion.’ A key part of this role was the library. 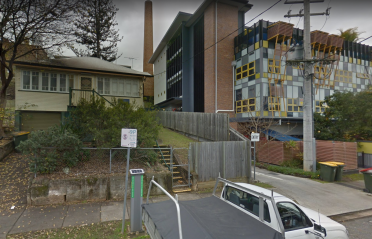 18 Clarence St, South Brisbane. A cottage next to the Mater.

In establishing the library, Sr Regis Mary Dunne, the founding director, sought advice from the Hastings Center (New York) and Kennedy Centre (Georgetown) about texts to purchase and method of cataloging.*

Unlike academic bioethics centres such as at Monash University, the QBC was explicitly focused at the lay public and medical staff. While the library was for research, it was research in the sense of individual and community groups trying to educate themselves about current bioethical issues. 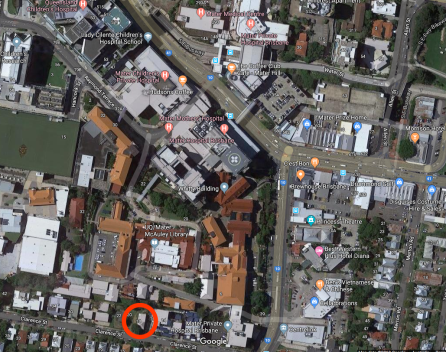 The QBC’s location in South Brisbane.

Furthermore, the QBC library was setup as a place for communal inquiry and discussion. In an interview with Sr Regis Mary Dunne, she recalled the importance of the location in South Brisbane. Not only was it near the hospital, but during the 1980s this was an area occupied by the working-poor, sex-workers, Aboriginal communities, and drug-users – many of the groups marginalised in Bjelke-Petersen’s Queensland.

The QBC was able to function as a resource and meeting-place for these diverse communities and would run workshops on AIDS, Human Reproductive Technologies, and other topics. They also ran a “Women’s Bioethics Study Group” and offered personal counseling.

These libraries continue to exist, but in different locations and serving different roles. One of the major factors behind these changes has been the rise of the internet and availability of information online. However, the changing roles of these libraries cannot be reduced to the internet. Institutional arrangements also altered.

Since the mid-1990s the Mater was questioning the viability of the QBC occupying its cottage. One of the main sticking points was that the cottage needed repairs to comply with Mater OH&S requirements. Neither the Archdiocese or the Mater seemed wiling or able to afford these repairs. In November 2007 the QBC moved from the cottage in South Brisbane to the leafy suburb Ashgrove, where it was located in St Finbarr’s Church. The library continued but no longer in an easily accessible location for medical staff or the wider community.

In 2018 the QBC moved again to become part of the Australian Catholic University (ACU), Banyo. This move brought the centre into context of higher education and research. This is quite different from its initial focus on the lay community and medical staff. In terms of the library, this move has meant the bioethics library has been enfolded into the ACU library at Brisbane. This means that access, particularly to online journals, is limited to those with library card and login privileges.

In the case of the Tom Ludowici Collection, it remains a separate bioethics library. However, it is now part of  Avondale College. Further, the bioethics library used to be housed in a location between the hospital and the carpark, which was convenient for doctors and medical staff to drop by to-and-from work. It is now physically located on the other side of the hospital, which has reduced the number of hospital staff using the library. 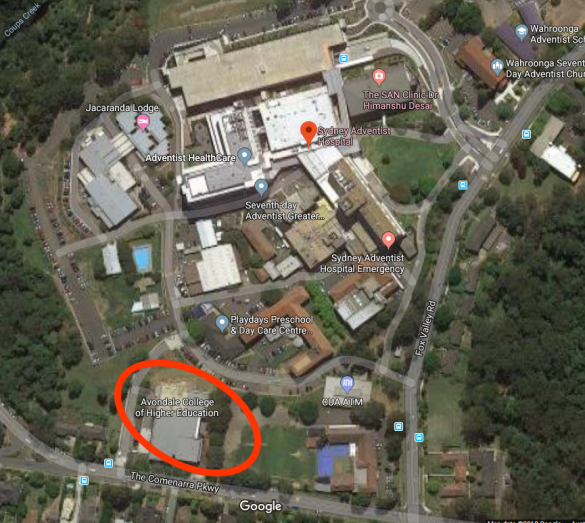 At the start I said the rise and decline of these libraries says something about the changing nature of bioethics, but also the way information is collected, accessed, and distributed.

I need to think about this further, but my initial response would be that the internet has obviously changed the way people access bioethical information and also find communities to discuss ideas with. Libraries were not only about providing access to resources, but communities with which to debate and interpret these resources and their relation to specific medical and moral issues of the day. The internet has supplanted this role, but as mentioned I don’t think these changes can simply be reduced to the internet.

I think there has also been a shift in the bioethical issues facing communities today. In the 1980s HIV/AIDS and reproductive medicine were unknown and, for many people, frightening developments. This created an imperative to seek out information and reliable people to discuss it with.

Today, it is arguable that there aren’t equivalent issues that are as widespread or novel. For example, commercial surrogacy or stem cell therapies raise a number of medical and moral questions, yet they tend to be technical and applicable to a small section of society. Of course, debate continues over “big issues” such as abortion and euthanasia laws, and fora for community-based discussion do pop-up from time-to-time, but nothing as lasting as a centre with a library and staff to instigate and facilitate discussion.

Anyway, I need to think more about all of this, and also the sociopolitical role of libraries outside of formal educational settings.

*Both the QBC and the Tom Ludowici collection adopted the the idiosyncratic Georgetown classification system. 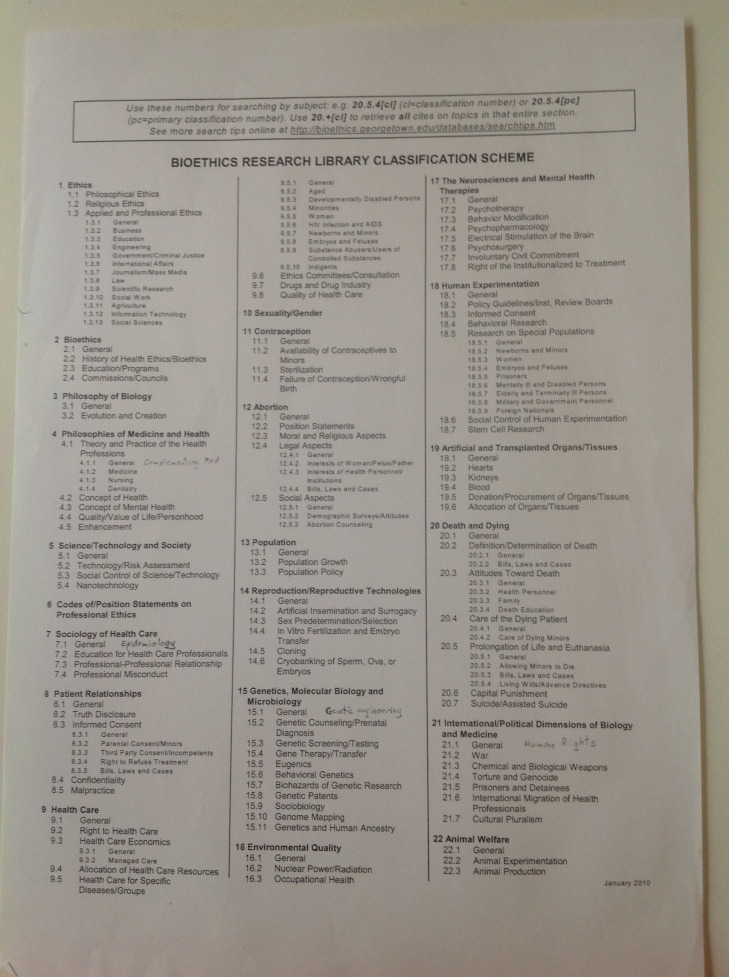