The rhetoric and hyperbole surrounding the ‘obesity epidemic’ serves the interests of politicians gaining headlines, journalists selling papers and the fitness industry acquiring customers, however in a recent book and interview Michael Gard argues that such statements are not supported by scientific and epidemiological literature. Rather than consensus and clear evidence of continued rise in obesity rates, and the more fundamental question of the relation between body mass and health, the literature demonstrates a plateauing of obesity and disagreement over the significance of body weight.

For a short and insightful discussion of these issues I recommend Michael Gard’s interview with Michael Duffy on ABC’s Counterpoint. Discussing the epidemiological, public health and political context of the ‘obesity epidemic’ Gard addresses key questions around health impacts, schools and children, class and life expectancy.

A point I found particularly interesting was Michael Duffy’s comment in relation to class – “You hardly see an obese person in parliament or representing a company on television.”

This comment reveals an important aspect of optics and class. There are a number of overweight and obese people in Australian parliament (and the business community) yet we don’t see them because they don’t fit our idea of what an obese person looks like. We don’t see their body as obese, not because they are physically hidden by the party, but they are hidden by our ideas of class and social status. Occasionally the obese body does emerge, as with Bob Hawke’s reported comments to Kim Beazley that he could never be Prime Minister unless he lost weight, but on the whole we don’t see their obesity as it is masked by their position, status, suit – their class.

However, it is also important to note that some in the ‘Fat Studies’ community argue that fewer fat people are promoted due to social prejudice against larger bodies. Like short stature, race and sexuality, they argue that social norms serve to exclude fat bodies from positions of leadership and power in business and political communities.

The new icon of the Resurrection © St Andrew Holborn
In blessing a new icon (above) depicting the Resurrection, Rowan Williams reflected on the relationship between history, age and the body (or more specifically the face). His sermon echoed and harmonized with aspects of Michel Foucault’s essay ‘Nietzsche, Genealogy, History’, as well as Mike Featherstone’s recent analysis of cosmetic surgery. Rather than comment on these points of harmony, I will lazily present three quotes.
Michel Foucault on the body and the imprint of history.

The body is the surface of the inscription of events (raced by language and dissolved by ideas), the locus of the dissociation of the Me (to which it tries to impart the chimera of a substantial unity), and a volume in perpetual disintegration.  Genealogy, as an analysis of descent, is thus situated within the articulation of the body and history. Its task is to expose a body totally imprinted by history and the process of history’s destruction of the body.
Foucault, “Nietzsche, Genealogy, History,” in Michel Foucault: Aesthetics, Method and Epistemology, Penguin, London: pp.375-76

Mike Featherstone  on plastic surgery and the attempt to erase history’s inscriptions.

Cosmetic surgery and associated techniques promise to repair the [ageing] process, by restoring a more youthful face, hence allowing greater congruence and expressive potential for the inner ‘ageless self’. An interesting development here is the increasing use of Botox (a diluted form of the neurotoxin botulinum toxin)…Botox is marketed as an anti-ageing technique to ‘clear’ wrinkles. It does so by blocking the nerve impulses that control muscle movement and therefore restricting the ability to contract facial muscles. The problem with Botox is that it makes it impossible for the face to form certain expressions and so limits the capacity to emote. It impairs the recording of the reactions to everyday events on the face, which normally leads to an accumulation of patterned muscular responses, which eventually mark the face with lines and wrinkles. Botox not only limits the potential for expression, but also the need for impression, the face as a recording device, a surface on which events are written, which shows the marks of time. Rather, the lived face, which is marked by experience, the emotional reaction to events, which is an archive of the accumulated memories one has lived through, which some people claim to be able to ‘read’ for signs of character traits, gives way to the new beauty ideal in line with the goals of the cosmetic industry.

Rowan Williams on the resurrection and transfiguration of the historical body.

The resurrection is the beginning of the new creation; the resurrection is the rising not only of Jesus, but of Adam and Eve. Then you look more closely at Adam and Eve in the icon, and you see that this is Adam and Eve grown old. They are not the radiant, naked figures of the first beginning of the story. Their faces are lined by suffering and experience, by guilt, by the knowledge of good and evil, scarred by life and by history. This is Adam and Eve having lost their innocence – the Adam and Eve who are of course ourselves, we who carry around with us the marks of history, of experience, of the knowledge of good and evil, hurts received and hurts done. Those are our faces on the icon, Adam and Eve ‘four thousand winters’ on, as the carol rightly puts it. Because the history of Adam and Eve is a wintry one, and we know that in ourselves.
So, when we speak of the resurrection as a new beginning, a new creation, it is in the sense that the risen Jesus reaches down and touches precisely those faces: Adam and Eve grown old. He doesn’t wave a wand and make them young again, strip off their clothes and leave then standing in their first innocence. What he deals with is humanity as it has become, our humanity, suffering and struggling, failed and failing. The resurrection is not about the wiping out of our history, pain or failure, it is about how pain and failure themselves – humanity marked by history – may yet be transfigured and made beautiful. Perhaps the most poignant feature of this and indeed all such icons is those aged faces. Adam and Eve four thousand years old in winter, turning to their spring, and being renewed.

Bruce would undoubtably be proud of the use of ‘Born in the USA’
In the Introduction to Sayyid Qutb’s Social Justice in Islam, Hamid Algar points to Qutb’s experience of America in the late-1940s and early 50s as influencing his turn from secularism to the Muslim Brethren. According to Hamid Algar, a catalyst for this transition in Qutb’s thinking was the celebratory response of the American’s to the news that a founder of the Muslim Brethren had been assassinated. Algar writes,

Despite completing a master’s degree in education at the University of Northern Colorado and being initially open to US democracy as an example of political governance, the American character and way of life left him disturbed and disenchanted. This disturbance led Qutb to return to Egypt and join the Muslim Brethren in the struggle against what he regarded as the corrupting and deleterious effects of the West.
Perhaps had there been little more loving of enemies in 1949, or as a compromise, not loving and rejoicing over their demise, then the radicalization of Qutb and the escalation of resentment resulting in the 9/11 attacks may have been averted. But perhaps Jeremiah 13:23 is more apt in this context than Matthew 5:44. 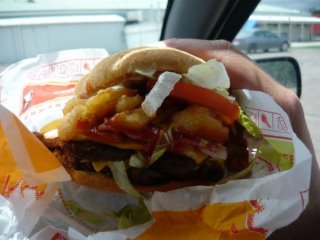 Hungry Jack’s Angry Angus – it’s not a kebab, but just as cheap and regrettable.
“Discussing his love of take-away food, Victor talked about regularly taking a doner kebab home at night while sober and extending it to the morning after (he did not use alcohol as an excuse-account for his actions). Victor said he would reheat leftover kebab meat in the microwave for breakfast because he enjoyed it so much. If Campos (2004) talks about ‘food porn’ then doner could be described as a cheap, casual lover who is so good partly because she has a reputation for being so bad.”
Lee F. Monaghan Men and the war on obesity: a sociological study, Taylor & Francis, 2008: 55.