The obscene underside of the war on terror is the refugee who sutures his lips and eyelids to mark his abjection, the child in the Woomera detention center whose response to the trauma of her incarceration is to repeat, “Don’t touch me I’m dead,” the Mexican migrant whose death in the desert constitutes a strategy of “deterrence” that is necessary to prevent others from attempting the crossing, the SUV driver whose realization of “the American dream” is fueled by the persistence of war and its pervasive economy of death.

– Elizabeth Dauphinee and Cristina Masters ‘Introduction: Living, Dying, Surviving I’, from The Logics of Biopower and the War on Terror.

On Saturday 24th January 2009 I went to the most sterile of venues to see one of the most potent of performers over the last forty years of popular music, Neil Young. I last saw Neil Young during his 2003 Greendale Tour – an album and tour which railed against post-September 11 politics, the destruction of the environment and The MAN in general.

Neil Young – like Bob Dylan – has largely been defined by his political messages and protest songs; despite his “other” songs being musically superior and lyrically more profound. In contrast to Dylan, Young’s political agitation has been more open, blunt and spanned across his career – from the chilling Ohio (1970) to 1989’s anthemic Rockin in the Free World and finally to 2001’s Let’s Roll and 2006’s Living with War which has the not-too-subtle Let’s Impreach the President.

So here I was going to see the Godfather of Grunge, the man who bucked the system so hard and shattered the genre boxes so completely that he was famously sued by his record company for not producing “Neil Young” albums. It should have been a night of illusionary liberation and bourgeois emancipation. It was suppose to be a night when those of us in Sydney who could afford the $140 tickets felt good about ourselves because we could sing-a-long with Neil about “Rockin’ in the Free World” while the free-market nose dived. A night where we could absolve our collective guilt for having been manipulated yet again by a politics of fear.

But alas I was rudely awoken from this dream of freedom and significance when I was reprimanded by a “security” officer for taking pictures during the concert.

Just after the climatic conclusion of “Cinnamon Girl” or it could have been “Cortez the Killer” I took this photo. 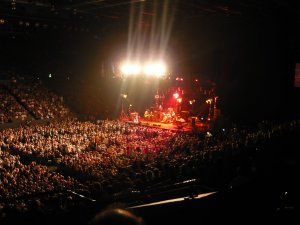 The body kept shouting – which I quickly discovered belonged to a “security” official – in spite of the loud cheering. It took a few attempts on the part of the “security” official before the message was passed on to me: YOU AREN’T ALLOWED TO TAKE PHOTOS! IF YOU TAKE ANOTHER PHOTO YOU’RE OUT!

I then said something to the tune of: “That is crazy! Do you think I am going to sell these pictures? What is the harm in taking these pictures? (NB I wasn’t using a flash) Keep on Rockin in the free world!”

The security officer then repeated the above and threatened to keep her eye on me.

Well that was it. I was not a free and happy neohippie – salt was rubbed into my wounds as Neil Young launched into “Rockin in the Free World” about two songs after this incident – it seemed that Neil was in on the joke. And now it all seemed contrived.

Anyway to quiet my revolutionary heart and to prove my zeal in the fight against all oppressors I took the below picture just after the finale – I counted the cost and figured if they throw me out now I will only miss about 30 seconds of cheering, yes I am a regular Che. 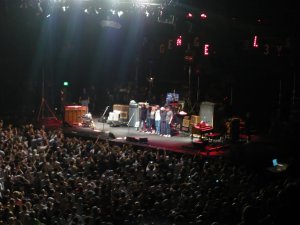